In no way I want to praise Google or any of this big companies but it turns out that the start of the trip is reconstructable due to them spying on us. Recently I got pointed to this page from a facebook post of a friend: Location History. The location history from using Google maps on my phone is stored on this page, which is part of my Google account. I was shocked to see that Google can see our daily moves if you don’t take the time to delete it or permanently switch off any navigation on the phone. Anyway, it turns out that this “feature” is now very helpful. Especially as the first files from the Polar watch are gone. Looking closer, not all the streets are properly mapped as it skips some way points. Good enough though! 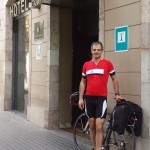 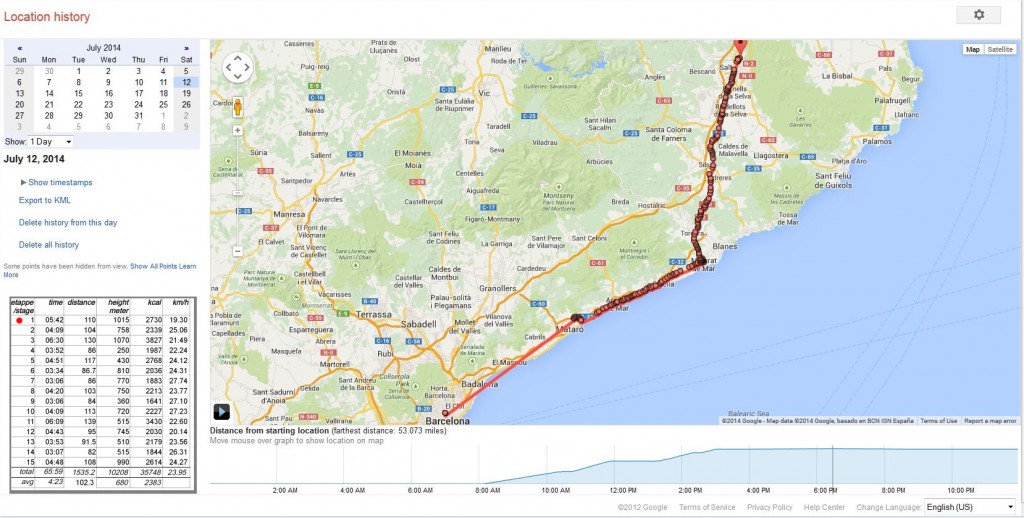 Stage 1: Barcelona to Girona – Bottom left: Statistic preview of all stages. See the first straight line starting in Barcelona. Seems as if the phone did not track way points at this time. As I had no Spanish SIM card I did not connect initially. As we got lost I switched it on and from there we got tracked all the way.

It was an amazing first ride as soon as we got out of Barcelona closer to the beach. Only for a short time we could actually see the coast with lots of sun hungry people enjoying themselfs. 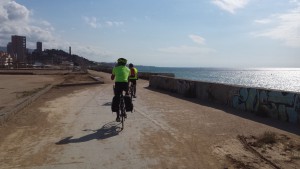 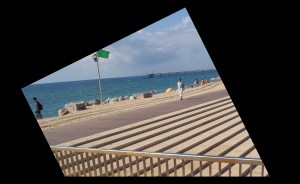 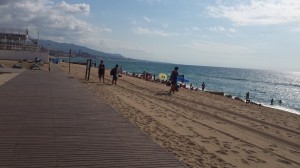 The stop for lunch was about 1pm at Malgrat de Mar, after cycling for about 3 hours. The heat and ride made thirsty and hungry. There are lots of cyclists alone and in groups out on this Saturday. Cars are very cautious and give good space. The road was in very good condition. Only once we got lost and ended in an area where there was no street anymore. I’ve looked now on the map again and see that there is still a road shown in Google, but actually, that is no more than a farmers path. Another “street” was a complete jungle of reef where we had better used a machete. Pushing the bikes through this 400 or 500 meters got us back on the main road N11. It was the first test for an app that I’ve never used before: “Navigator Free”. It took a while to understand it’s limits but then I found it very helpful. The initial tour plan was done on classic paper maps, but there you don’t get the little roads, as only one scale is given on the map with us. So both ended up to be the perfect combination of overview and detail maps.

Obviously I had to get a sunburn – the typical cyclist sunburn. Face, arms, top part of legs, even the feet. Feeling free and unconcerned like a little kid. 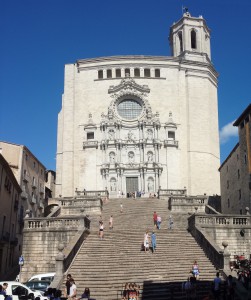 Girona Cathedral. See the demon at the bottom of the stairs?

Here the stairs up to the facade of the Cathedral of Saint Mary of Girona, which was first a christian church, then a mosque and again a church after Charlemangne reconquered it from the Islamic occupation around 785. 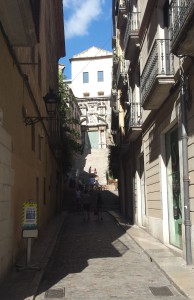 Girona – cobbled alleys give it a medival touch.

But what I found more interesting is the little alleys with cobble stone which still give this city a medieval touch. 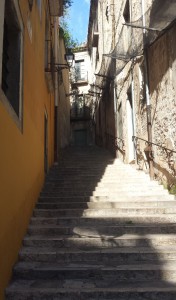 What are those nets for? Garbage?

We saw the poor Brazil team loosing against Netherlands in the game for third place. Of course they haven’t recovered from the 1:7 epic defeat against Germany on Tuesday the 8th July 2014, which is a historic day I will tell my nephews and nieces every time we talk about football!!