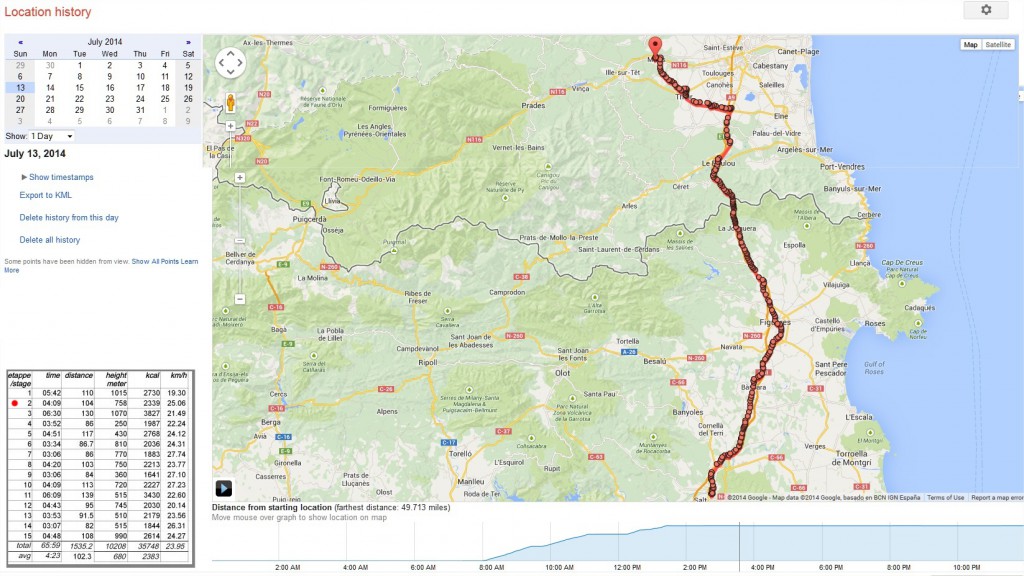 Stage 2: Girona to Milas – Leaving Spain, crossing over to France into the northern Pyrenees. 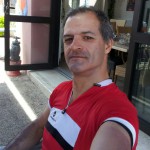 The newbie with a bit more confidence. Look at the sunburn!

Start at Girona about 8am on the N11 heading north with good road and beautiful sunshine. Not much to remember on that rather flat road, apart from lonely women at the lay-by waiting for the rain (or whatever), towards Figueres, where we have a quick stop for a coffee. Only now it is where it get’s steeper up to the border of Spain to France, which is on the highest peak of this day at Le Perthus. 940 ft about 286 meters does not seem high but the build up to this peak was some effort – earning the meal! As it was not yet lunch time we carry on and enjoy the down hill ride to Le Boulou, where a well deserved meal is waiting. 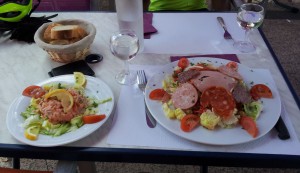 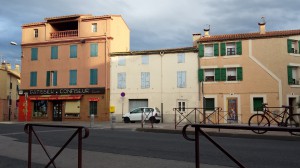 Millas – bet this facade hasn’t changed in years … where are the people?

Now it’s only 30 kilometers to Millas on the D900 and D612 through Thuir. Leaving Perpignan aside, which is in hindsight probably a better option then Millas. The little town has not much to offer on this Sunday. No restaurant is open so we have to take the best next option which is the local bar. Looking now at street view (again Google) at this time of writing (24th August), I can see the same scenery on the snapshot I took, when we sat outside the “Cafe De La Promenade”. Let’s see how the evening evolves: At first there are only a few old man and women sitting, chatting and slurping their Richards and beers inside and outside the bar. Watching sport on TV or playing cards (the men of course, women only talk and watch the people come and go). Then from around 6.30 to 7.30 pm it get’s busier. There are some younger people turning up, showing off their cars and mopeds (and muscles and girl friends), taking care of the loved one close by. Every foreigner is observed out of the corner of an eye. Then there are the village idiots, driving their car up and down the street, with loud music and windows down, observing the people. Who’s there today, any one impressed? Not yet, so give it another try. 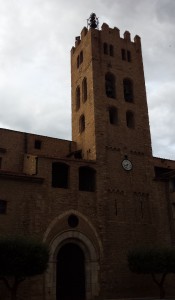 There’s not much here, as said – in a blink we’ve seen it all. It reminds me very much of the time I was young in Wiggensbach. It was maybe a smaller village than Millas but exactly the same scenario, day after day – it’s just warmer here.
The “hotel” is a bit of a surprise as when we arrived earlier it was hard to find. No one was answering the bell. The hotelier was asleep – siesta! He’s done a good job to get the old station converted into a hotel or better a chambre d’hôtes. The former waiting and ticket hall is the entrance with nice comfy sofa in fifties and sixties style furniture. That’s apparently when the SNCF decided to close down this station. Very nice rooms, modern and clean. Only one catch: the price. As there is 75 EUR to pay for this place you would expect a good breakfast. But his cooking skills are far from good. Anyway, it was still a pleasant stay in the middle of nowhere. 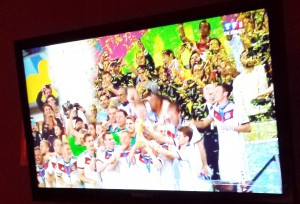